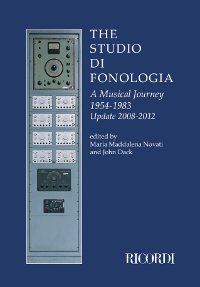 One of the main outcome of the project is the publication of the book The Studio di Fonologia – A Musical Journey, edited by Maddalena Novati and John Dack, and published by Ricordi.

The opening chapter, authored by Angela Ida De Benedictis, is devoted to a historical overview of the Studio and to a comparative analysis of the different musical thoughts that drove the three main electronic music centers in the EU (Cologne, Paris, and Milan). It also provides a vivid picture of Luciano Berio and Bruno Maderna.
Building on his profound knowledge of electronic sound production means, Alvise Vidolin introduces the readers to the compositional approaches of the pioneers of electronic music and to the working methodologies adopted inside the Studio.
Antonio Rodà presents a detailed discussion of all the devices built for the Studio by Alfredo Lietti, as well as several commercially available devices that were later added to the equipment. The author meticulously integrates the discussion with project schemes, pictures, and testimonies, producing a sort of chronology of each single device of the Studio.
Giovanni Belletti, a true eyewitness of the late years of the Studio, provides a precious contribution and shares his memories of Marino Zuccheri: an “epic character”, the technician-performer of all the most relevant electronic music compositions of those years.
Federico Avanzini and Sergio Canazza provide a reflection on preservation and restoration of analogue audio recordings, and argue that digitalization should involve not only the recordings but also the devices themselves, using contemporary technologies and innovative “physically-based” digital sound synthesis paradigms.
In a complementary fashion, Stefania Serafin and Steven Gelineck trace an exciting journey from the origins of electronic instruments up to the conception of the Studio, and account for their research which led to the realization of physical interfaces that embody the original instruments of the Studio.
John Dack introduces the reader to the seductions of open musical forms through the analysis of Scambi, by Belgian composer Henri Pousseur, one of the very first examples of this compositional praxis. The author develops a deep reflection on the compositional philosophies of those years, and on the use of noise in Scambi, which Pousseur considered as a topical compositional element.
The second part of the book contains the catalogue of the musical production at the Studio, curated by Maria Maddalena Novati. The catalogue is enriched with several new data (particularly about the early production), and with links to related publications. New titles have been added, thanks to the researches conducted during the last three years and to new acquisitions of tapes from other archives. Moreover, the catalogue now includes part of the video productions (available at the Teche Rai or in other archives) whose soundtracks were produced at the SdF. These latest additions to the catalogue open the door for a deeper analysis of functional music, as they account for a whole musical literature that remained almost unknown up to now, and involved such composers and Berio and Maderna, but also other authors who confronted themselves with new models of TV shows.

Editors and authors believe that this book will provide a complete and valuable tool to anyone looking for a better understanding, from both the technical and the musical viewpoint, of an extremely dynamic – if not contradictory – period of the italian and european music history: a very short moment after all, less than thirty years long.

One Response to “The book”